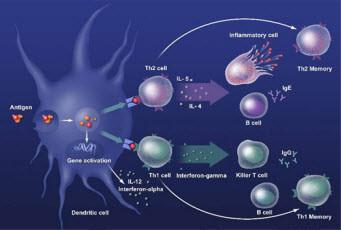 Article at a glance

In order to understand how some of our products work to support and modulate the Immune System, we must first explain the mechanics behind our body’s defenses. One of many defensive systems in our anatomy, the Immune System is an alliance of organs, cells, and molecules constantly searching for foreign pathogens.

Scientists recognize two sections of the Immune System: innate and adaptive. The innate, or “non-specific,” system is composed of Macrophages, Mechanical Barriers, Neutrophils, and soluble factors such as the Complement System and Antimicrobial Peptides. This significant portion of our immunity serves as our body’s first line of defense; often, it is more than adequate in fending off the onset of a full-blown infection.

The adaptive system, often referred to as “specific immunity,” recognizes the toxins and protein characteristics of all invading anomalies. Our specific immunity is comprised of Antigen-Presenting Cells (Dendritic Cells & Macrophages), T Lymphocytes, and B Lymphocytes. Importantly, all pathogens are recognized by either a specific Antibody (B Lymphocyte) or a specific Receptor (T Lymphocyte). Since microbial invaders are capable of mutating and evolving elusive attack plans, our body requires a vast number of immune defenses ready for action. The perfect solution to this dilemma are Antibodies: these incredibly versatile molecules can identify and adhere to an offending microbe, trigger the complement system, and initiate the Dendritic Cell/ Macrophage system of Antigen-Presenting Cells. When an Antigen is found within our bodies, Lymphocytes will proliferate and develop massive amounts of Antibody-Making Cells, specific to the Antigen. Vaguely, our body creates Five Classes of Antibody (Immunoglobulin): IgM, IgG, IgA, IgD, and IgE. The IgM class is formed first, they are our body’s “primary,” most versatile response; other classes are termed “secondary antibody response” mechanisms, since they are the ensuing formations.

B Lymphocytes are responsible for the creation and discharge of highly specific antibodies involved in immune reactions; accordingly, these antibodies recognize and coat the malicious bacteria, drawing the T lymphocytes and Macrophages toward the invader. These B Cells operate as targeting mechanisms, aiming specifically at the membrane of cells and microorganisms we need to eliminate. When Lymphocytes and Macrophages are scarce, Beta Glucan has been shown to suffice. Countless experiments have demonstrated stronger healing when Glucan and Anti-Cancer Antibodies are used simultaneously (Hong et al., 2003, 2004).

The Adaptive Immune System is sustained by the presence of memory; when an infection is successfully defeated, a minute number of lymphocytes remember the primary exposure to the bacteria and are left behind. In the event of a postliminary manifestation, the left-behind cells are responsible for a hastened, able-bodied, immune reaction. The theory behind vaccination is based on these memory cells: injecting a controllable form of an infection to build a “memory” towards a future attack.

T Lymphocytes stem from the Bone Marrow and are “coached” in the Thymus; these cells focus on the control of intracellular infections. Each T cell encompasses an individual receptor for antigen recognition; when bound, these cells replicate and expand to form memory and effector variations. One variant of T Cell, the Cytotoxic T Lymphocyte, dispenses Cyotkines, causing cell death and/or alluring Macrophages and other cells to a specific site. The most known spectrum of these white blood cells is called “T Helper” cells (CD-4 Positive Cells), which advertently or inadvertently regulate the immune response of other Immunocytes (cells of the Immune System). In contrast, there exists a “Suppressor” T Cell, or Regulatory T Cell, that is responsible for negatively regulating the response of our immune system: therefore acting as a preventer of Autoimmune Disease.

In short, there are three distinctive cells contributing to our immunity: the aforementioned T and B Lymphocytes and your Immune System’s first line of defense, the Macrophage. These are frequently deemed the most important cell contributing to defensive reactions. Found in every organelle and tissue of the body, they survey their surroundings for anything “non-self.” In addition, they direct circulating streams of fluid within the body; importantly, no significant reaction to pathogens can be undergone without being spotted by a Macrophage.

These fully matured, final-stage cells emanate from Pluripotent Stem Cells within the Bone Marrow. The preliminary stages of the Macrophage are as follows: Monoblasts divide into Promonocytes that become Monocytes, which mature in the Bone Marrow from instructive pressures of their microenvironment (it is here where Beta Glucan can play another important role). Through blood circulation and random processes, Monocytes exit the marrow and migrate throughout the body. They maturate in their residing tissues and organs into the key player of immunity, the Macrophage. Notably, the origin of Neutrophils and other Granulocytes are similar to cells of Myeloid Lineage (cells, like Macrophages, which are created in the Bone Marrow and/or Spinal Cord); they encompass similar properties as well.

Adding to their importance, there is no living creature on Earth that does not rely on Macrophages for its immune reactions. As the oldest, best-preserved evolutionary cell in existence, the Macrophage fulfills its duties by changing from a steady state, to an activated state. These cells can only perform optimally after becoming fully activated. In this stage, incredibly sophisticated metabolic changes occur, yielding a change on the cell’s membrane.

Their function, at the most elementary level, is to evaluate the predicament, recognize the intruder, and devour (Phagocytose) their target. Phagocytosis is phylogenetically the oldest defensive maneuver in the Animal Kingdom; it is, by far, the most distinct function of the Macrophage. Following initial interaction with its prey (microorganisms, macroscopic particles, mutated or damaged cells), cogent intracellular Enzymes eliminate the consumed material. Included in their list of duties, Macrophages are able to generate over one hundred distinct molecular agents to aid with eradicating malicious bacteria and parts of pathogens. These powerhouses can switch between steady and active states, therefore, there is no risk of an over stimulated immune system from a Glucan Supplement.

After years of research, the irreplaceable presence of Macrophages in host defense has finally become recognized. Found in every multi-cellular organism discovered thus far, Macrophages can be found in creatures void of any other immunocytes. Despite their place in immunity, they are a vital catalyst in the remodeling of tissue during embryogenesis, tissue turnover, tissue renewal, and the destruction/repair of tissue in the event of an injury. Furthermore, these Phagocytes regulate microorganisms such as Bacteria, Fungi, and Virus-Infected Cells. Therefore, these are one of the most versatile cells in the multicellular organism; it can be said, that their key role in immunity is still distant from complete comprehension.

Collaborating with Macrophages are T Lymphocytes. When activated via the Macrophage network or a specific drug, these now “Natural Killer Cells” (NK Cells) pursue and destroy Viruses, as well as Cancer Cells. Their sole purpose is to identify and assassinate cellular byproducts of viral infections and carcinogenic mutations. Their ability to eliminate invaders, or malignant/damaged “self” cells, is quite extraordinary.

Concluding, all of our immune cells collaborate harmoniously, continuously interacting and functioning because of information gathered from a network of humoral factors such as Enzymes and Cytokines.

Problems With The Immune System

A myriad of negative influences contribute to the impairment of our body’s natural defense, including but not limited to: years of infectious attacks, continual stress, environmental pollutants, poor nutrition, sedentary lifestyle, types of radiation, excessive alcohol consumption, lack of sleep, inadequate exercise, abusing antibiotics & other medications, and even a lack or proper vitamins and minerals. These catalysts of Immunodeficiency emanate as habitual infections, decreased blood cell count, overall fatigue, slow-healing wounds, and a heightened susceptibility to differing oncological diseases.

What's The Best Way To Boost Your Immune System?

After researching the popular immune strengthening supplements, Vaclav Vetvicka, Ph.D has found that Better Way Health's Glucan 500 is far superior to all other brands. As shown below, Better Way Health Beta Glucan almost doubles in potency compared to the closest competitor.

Our ACES Team is always there to help.

This Third Edition expands and amplifies the research and new information on Beta Glucan and how it can assist the body's immune system.

What Customers Say About Beta Glucan

“It works. Everyone I know has been sick with something. I have not even had the sniffles!”

“I have been an avid reader of medical journals for many years because of my desire to live as healthfully as possible. There is a sufficient amount of scientific evidence over a su...”

“Love the product, just taking a break for finance reasons.”

“This product is the best for who want to boost their immune system, I strongly recommend it.”

“I'm 79 years old - I've been taking Beta Glucan for years - and I don't remember the last time I was sick.”

“It is good, but I am not sure if I need it. There is no difference if I take it.”

“I did notice a difference while taking this Beta Glucan and 500 Don’t break out with natural lotions I use on my face, when I take this product I stopped taking it and started brea...”